Rainbow Falls Provincial Park straddles the TransCanada Highway, making it a convenient stopover if your trip takes you between Sault Ste. Marie and Thunder Bay. The rugged mixed forest, rocky outcrops, and island dotted lakes of Superior’s North Shore inspired some of my favourite Group of Seven paintings. It’s a beautiful drive. Keep your gas tank on the high side of empty though, there are some long stretches between gas stations. 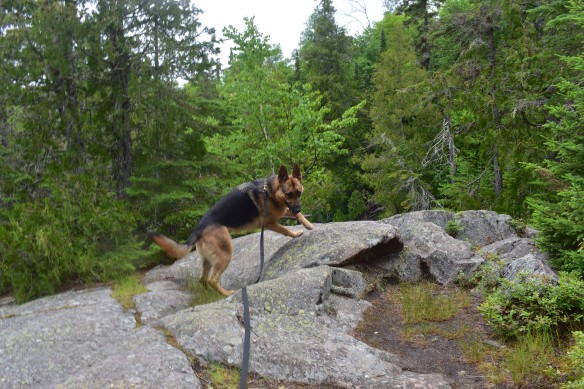 The gorgeous hike along the this park’s namesake falls is difficult. It seems weird to call a hike with a boardwalk difficult, but oh the stairs, it feels like you’re taking the stairs up the Eiffel Tower. I’ve been working on gratitude lately, and the walk up these stairs made me grateful for Milo the AwesomeDog’s powerful leash pulling.

My firewood appears to be left over from a building project allowing for a geometrically pleasing camp fire.

Milo and I stayed at Whitesand Lake Campground, it was nicely wooded, but the trees were mature and there wasn’t much as much privacy providing understory between my campsite and my neighbours as I would have liked.

Also, this park lacks an off leash dog area and I saw more off leash dogs in the campsite than I’d seen in other parks. I expect some people will give their dogs off leash time whether or not there’s a legal spot to do it–an argument for putting dog exercise areas in more parks. Either that or hiring more park rangers! 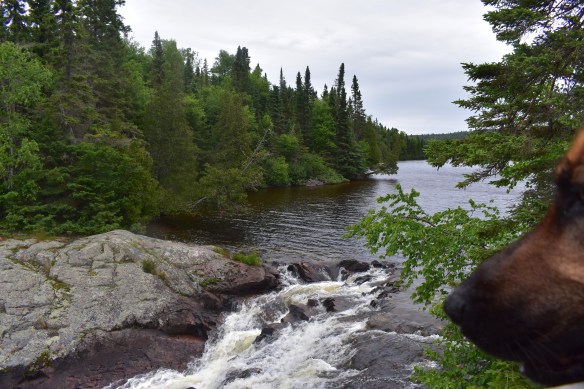 Milo can’t keep his nose out of my pictures.