I was snooping around the American Kennel Club website when I came across an article called “The Biggest Loser: Canine Edition.” Before I knew it I was scrolling through a set of ‘success stories’ of extreme dog weight loss; stories that included stats, before and after pictures, and heart wrenching personal narratives. The first pup was Denis from Ohio, who went from a hefty 56 to a svelte nine pounds. Before his weight loss we see a picture of Denis sitting alone, beside a tennis ball. After Denis loses the weight and goes through surgery to free him of two pounds of excess skin, we see him happy in the arms of a smiling woman. Fat, sad, lonely Denis became thin, happy, and loved. It is tempting to cheer for Denis, that is until a person realizes how this story reinforces serious and harmful negative stereotypes about weight.

This sort of heroic dog weight loss narrative litters the internet. In addition to the AKC “Biggest Loser: Canine Edition,” the American Dog Club has a “The Biggest Loser: Doxie Edition,” which tells the story of Obie, the 77 pound Dachshund. Obie’s handler hopes Obie “can be an inspiration to any person or animal trying to lose weight.” If you google “biggest loser pet” you can spend an entire afternoon (believe me I know) reading stories, scrolling through facebook pages, and exploring contests and prizes for extreme dog weight loss. The internet, it seems, is very concerned about fat pets.

This internet concern echoes warnings from veterinary medicine and science. Alexander German of the University of Liverpool Institute of Ageing and Chronic Disease writes that “obesity is now recognized as the most important medical disease in pets worldwide.” And the Canadian Veterinary Medical Association (CVMA) identifies “weight control/management as the number one thing a pet owner can do to increase the length of their pet’s life.” The CVMA documents a parade of health horribles resulting from pet obesity including problems such as high blood pressure, increased risk of kidney, heart and vascular diseases, and increased incidence of arthritis, all of which are also health risks faced by obese people.

Some veterinarians draw explicit connections between human health and fitness, and pet health and fitness. For example, the Association for Pet Obesity Prevention‘s mission is to make “the lives of dogs, cats, all other animals and people healthier and more vital.” Founder, veterinarian Ernie Ward, is committed to “developing and promoting parallel weight loss programs designed to help pet owners safely and effectively lose weight alongside their pets.” It is not surprising that my doctor and my dog Milo’s vet are both pleased that Milo and I spend so much time walking together.  We both need the exercise. This focus on the relationships between overweight pets and overweight people, as well as how we think about overweight pets and overweight people, extends from the clinic to the scientific laboratory.

There is a growing body of veterinary research on pet obesity. One concern among veterinary researchers is the absence of a clear standard for what counts as a healthy weight for dogs. Dr. Christopher Byers begins his review article, “Obesity in Dogs,” with a discussion of Body Mass Index (BMI), a research and diagnostic tool developed for humans. Byers points out that the lack of a BMI-like standard for dogs makes it difficult to conduct objective research. This desire for a doggy BMI is troubling because the problems with using BMI as a human health indicator are legion.

But, we can put that worry aside for now because instead of figuring out a dog’s BMI, veterinarians assign a dog a Body Condition Score (BCS) based on their observations of its fat, muscle, and overall shape. Vets will keep track of a dog’s BCS and weight as measures of its overall health and to track health changes over time. The body condition system that I’ve come across most frequently was developed by Nestle Purina in 1997. 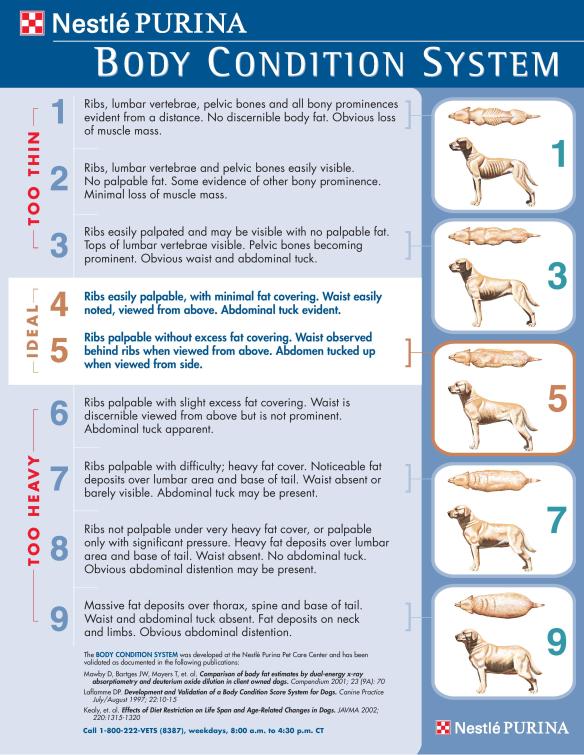 Based on this system my vet complimented Milo on being a four or five. I balked, “What do you mean a five, he’s a 10!” My vet quietly let me know that the scale only goes up to nine, and that a four or five is ideal. I’m not the only dog guardian who identifies, maybe a bit too closely, with her pup. The last time I was at the vet’s office, a portly golden retriever came in for her weekly weigh in. The golden’s guardian left the clinic crestfallen—her dog didn’t lose any weight that week. Thankfully, the dog was not fazed by this apparent failure, because losing weight and keeping it off is really difficult for dogs, and for people too.

Milo’s body condition score indicates that you can easily feel his ribs and vertebrae when you pet him, you can see his waist from above, when you look at him from the side you can see that his abdomen is tucked up behind his ribcage, and he is well muscled.

Complementing Biggest Loser style online narratives of canine weight loss, the internet provides generous guidance for how to help your dog lose weight. Two themes run through this advice. The first is that we humans have a responsibility to make sure that our dogs aren’t fat, and the second is that weight loss is a matter of calories in and calories out. In her article “The big fat truth about canine obesity,” Christie Keith, science writer for The Bark, tells us that

While healthy, permanent weight loss in humans is hard to achieve, it’s much easier with dogs. They don’t eat a container of Ben and Jerry’s after a stressful day, and they rarely hit the drive-through instead of making a healthy dinner. As long as the human in the relationship manages not to overfeed and under-exercise the dog, weight-loss programs for canines are surprisingly successful.

While it’s true that most of our dogs eat what we give them, and exercise when we walk them, when we shift our focus from popular to more scientific sources of information it becomes apparent that achieving and maintaining weight loss for dogs and for people is more complicated than avoiding fast food and ice cream. With respect to people, some research indicates that, in the long run, it may be better not to diet at all because most dieters gain back more weight than they initially lose. This often leads to yo-yo dieting, otherwise known as weight cycling. And there is initial evidence that weight cycling may be an issue for dogs as well. Dr. Byers reports a study on weight loss and gain in beagles. He writes that this study

demonstrated weight cycling in dogs in which rapid regain of body weight occurred after successful weight loss. These findings support the phenomenon of metabolic down regulation of energy needs with weight loss, which continues after target weights have been achieved.

With both dogs and humans, there is a significant mismatch between popular and scientific accounts of weight loss. This does not surprise me because the popular story of discipline, hard work, and responsibility spelled out in a heroic personal narrative is catchier than talk of metabolic down regulation and weight cycling. We love our heroic stories, and they sell.

The heroic narrative is foundational to The Biggest Loser TV shows. The trouble with these shows is that they ended when most of the characters had lost a lot of weight. These shows did not reveal how excruciatingly difficult it was for contestants to maintain their weight loss or how many of them regained significant amounts of weight. Research indicates that this is because after their weight loss, contestants burned fewer calories than other people their size, and developed hormone imbalances that left them feeling continually hungry. People, as well as beagles, experience metabolic down regulation after weight loss.

Unfortunately, if we accept weight loss as simply a matter of discipline, work, and responsibility it becomes easy think of not losing weight or regaining weight, as failures of discipline, work, and responsibility. The science shows that this is false. However, this misleading story is common and supports negative attitudes about fat people being lazy and irresponsible.

I think trying to keep ourselves and our dogs as healthy as possible is a great goal. Milo and I walk, for miles, every day. We need and love the exercise. 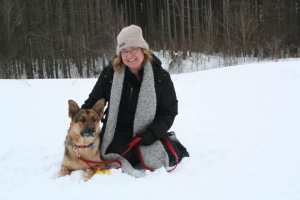 Milo gets me out hiking, even in the middle of winter.

However, the goal of promoting health and fitness is undermined by negative attitudes and stereotypes about fat people.

It is common and easy for stories about fat pets to reinforce these negative attitudes and stereotypes. For example, one of the fat dog stories on the American Dog Club website features a funny/ not funny picture of a roly-poly white bulldog, wearing a towel, and reclining on a sofa with a plate of muffins. The dog’s head is covered in pink curlers and the caption under the image reads, “dogs can become couch potatoes too.” The connection with people is pretty clear: the dog represents the stereotype of a fat, lazy, and ill groomed woman.

Even the names of the characters reinforce negative stereotypes about fat people.

This sort of stereotype is the basis for prejudice and damaging inequalities, inequalities that are stronger for fat women than they are for fat men (the men have to be fatter before they kick in). Fat people get worse medical care, have lower job security, lower earnings, and slower career advancement than thin people. This is not just unfair, it also leads to stress, which can lead to weight gain.

Negative weight stereotypes impact children as well as adults. The book Flabby Cat and Slobby Dog is an example of negative stereotypes about fat pets and people directed at children. In this book, Flabby and Slobby go on a difficult quest and lose weight because

You don’t have to dig too deep in this book to find the message that being fat is the same as being a slob, and that it is worth risking your life to be thin. This is troubling because research in Canada, Iceland, Australia, and the US reveals that overweight children are not just a target of bullying, but comprise the group of children most likely to be bullied, and that adolescent girls who engage in strict dieting are significantly more likely to develop an eating disorder than those who don’t. This book might be intended to help fight childhood obesity, but it reinforces negative and dangerous attitudes toward fat people and weight loss.

Pets are part of our lives and part of our culture. Negative weight stereotypes hurt people. Why on earth would we add to this problem by invoking these stereotypes with respect to our dogs?  The things we do with our dogs, what we say about them, and what we write about them are not separate from the rest of our lives or from our culture. In fact, for many of us, our dogs are an integral part of our homes and our families, and a rare source of unconditional love.

I want our dogs to be healthy and happy, but we need to be careful to talk about canine weight and fitness in a way that enhances human, as well as canine, health. The way we talk about and relate to dogs reflects and reinforces values in our culture because, whether or not we’re a dog guardian, dogs are part of our lives.

4 thoughts on “Can stories about fat dogs hurt people?”