At 22 I was finishing up my undergraduate degree and itching to see the world. I needed to get off the Canadian Prairies, away from Saskatoon where I was going to school, and escape any and all things related to farming. So, I bought a good pair of shoes, a backpack, and a plane ticket and was off to eat my way across Europe. 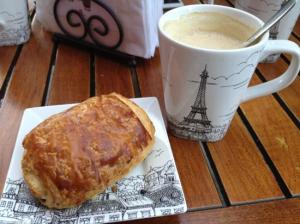 I devoured curry and toured the Tower of London, nibbled Pain au Chocolat after climbing the Eiffel Tower, picnicked with a grey-eyed man on the Piazza San Marco and then we strolled arm in arm along Venice’s canals. I gorged on goulash and spaetzle before retiring to Budapest’s Roman Baths, snacked on Sachertorte after seeing The Magic Flute at the Vienna Volksoper, and drank beer under Munich’s Glockenspiel. And, I wallowed in homesickness as powerful as it was unexpected. I would never have predicted that the best part of that trip would be returning home.

Johannes Hofer combined the Greek words for homeward journey, ‘nostos,’ and ache, ‘algos,’ to give us ‘nostalgia,’ which originally meant, quite literally, ‘homesickness.’ He coined the term to describe an illness rampant among Swiss mercenary soldiers in France who were incapacitated by a melancholic yearning for their mountain homes.

My travels always ended with nostalgia, until now.

If it weren’t for the brutal facts that winter is coming, and that I need to, eventually, show up at work to get money for gas, beer, groceries, and campground fees, I would have happily kept on trucking. Not for a single second did I ache for home.

Milo and I in our travel trailer—like turtles, our home was always with us. And I realized that, for me, home is where the puppy is.