A post like this is silly because it has already been written about 14 million times. Pretty much all the dog trainers and all the dog professionals and all the municipal codes tell people to leash their dogs. 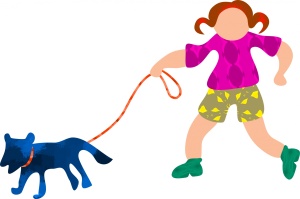 I’m writing it again because Milo and I were charged by a little schnauzer. I scared the little dog off and the schnauzer’s person got angry at me for yelling at their dog. What the what? I know that people respond weirdly when flustered. But seriously, that little dog charged my German Shepherd and I intervened before my dog did. That, my friend, deserves thanks. In fact, it deserves ice cream. Heck, it deserves a bottle of scotch.

This is not a rare event. Milo and I have been charged by Golden Retrievers, Poodles, little terriers, and a bunch of other pups.

I don’t care if the pup is a Yorkie or Mastiff, a puppy or senior dog, or a dog that’s an angel straight from heaven. I really don’t care if the dog is friendly. Even if the handler knows their dog can heel past a butcher shop, I don’t know that, and off leash dogs worry me.

Milo and I worked very hard, for years, to help him stay calm around other dogs. He is gigantic and now his behavior is, mostly, pretty good and so a person might not expect him to be stressed by a charging dog. He is. And so am I.

Where there are leash laws, please leash your dog. It’s the decent thing to do.