After being on the road with Milo for nearly eight weeks, I’ve turned us around and we’re meandering back to Ontario. This means we have to traverse Manitoba. I don’t have anything against Manitoba, but if I’m going to be on the prairies I feel like I ought to be at my Mom and Dad’s place in Saskatchewan. So Manitoba ends up being the province I sprint across. On Milo and my trip west, we spent a night at a truck stop outside of Winnipeg. On our way back east I thought it might be nice, instead of trying to sleep to the low rumble of a Peterbilt, to listen to some laughing loons. We traded a sleepless night at the Husky for a few days at Riding Mountain National Park. 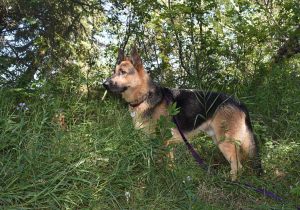 The first thing to know is that Riding Mountain National Park is big. It covers almost 3000 square km, and has 400 km of hiking trails, a bunch of lakes, and a whole town where you can buy gas, groceries, and ice cream. There are also 14 million cabins. I didn’t actually count them, but if I had to guess I’d say 14 million. The developed part of the park feels like a resort. There is smooth pavement and clear signage, and flower arrangements mark the campground entrance.

Although the park is big, most of the people are in a tiny part of it. Happily, you don’t have to go that far to get away from them. As a result, the dog situation here is really different from other places I’ve visited. I asked at the guy at the campground kiosk about a dog exercise area. He looked at me like I was from Mars.

No there aren’t ‘off leash areas.’ Just go where there’s no people. Of course, you might wanna think twice because of the bears.

Well, OK then. It seemed like I’d have to use my own darn common sense.

The size of the park is overwhelming, almost paralyzing. It’s hard to know where to start, and so it’s hard to start at all. Milo is a big help here. He has to move, has to walk. So we just picked a direction, and went.

I was hoping for solitude and we found it right away. We discovered a warm, clear little lake and spent the whole afternoon playing in the water. By the way, then name of the place is actually Clear Lake.

Milo must have been a retriever in a past life, or maybe a seal. The dog just wants, even needs, to swim.

“What on earth is this toy doing just sitting here in the shallow water?”

Finding this spot made the first day of our stay at Riding Mountain a success.