While there are things that worry me about walking with Milo in the Canadian winters, the cold isn’t one of them. With good gear and common sense, the cold is not that hard to manage. Besides, Milo loves it, or at least he loves the snow. He frisks like a puppy when he sees the white stuff falling. But I do worry about

Here’s how I minimize those risks:

To protect myself slipping on icy streets I wear Yaktrax, which are traction devices that attach to the soles of your boots. I like this brand because they tend to stay attached and they’re not sharp, so you won’t accidentally cut yourself (or your dog).

I apply Musher’s Secret, a good paw wax, to Milo’s paws before we head out. This protects him from sharp ice and rock salt, and slows down the build-up of snow between his toes. It is worth the cost because I want him to be comfortable and the thought of restricting Milo’s exercise while his paws heal makes me shudder. 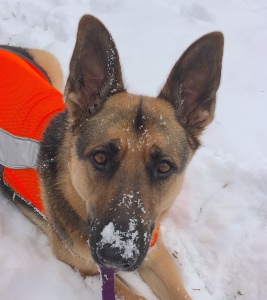 In my part of the country and in my neighborhood, drivers speed. Although this sort of irresponsible behavior makes me angry, it actually makes me furious, aside from shaking my fist there is not much I can do. Add slippery streets and the fact that in midwinter it’s dark by 5 PM, to the scofflaw speeders, and walking in my residential neighborhood becomes downright dangerous. Milo and I both have dark coats, so I put a reflective vest on him, and I wear a blaze orange touque. When people see us, they might think we look bizarre, but at least they see us! Milo loves his vest because it reliably predicts a winter walk.

BTW, as I was working on this post, I came across a similar article over at Maplewoodblog.  You should check out how she manages her winter walks. Hint: she likes Musher’s Secret and Yaktrax too.

What do you do to keep safe on your winter walks?