One of the best things about pulling a travel trailer is that there is no need to hurry, ever. I keep The Serenity (good name for a trailer eh?) well stocked with beer, chips, and magazines and Milo and I can settle in for the night almost anywhere. I’m like a turtle carrying my home on my back.

So, as I was leaving my brother and sister-in-law’s farm near Calgary, Alberta for my folk’s place, which is just outside of Saskatoon, Saskatchewan, I decided to leave the beaten path. I took advantage of the fact that Prairie roads are laid out in a regular grid and decided to just head East. I’d try to stick to paved roads, but other than that, as long as the setting sun was in my rear-view mirrors I’d consider myself on target.

Early fall on the Canadian Prairies is delightful—there was a sapphire blue sky, golden wheat fields on my right, and fields of fuzzy barley on my left. Ahead someone had their swather out in a canola field. The canola’s green stalks and bright yellow swathes created mile on mile of stripes. This time of year harvest is just starting and there isn’t yet that frenzied feeling of racing to get the crops in before the snow flies. The countryside is a warm picture of peace and abundance that represents what I love most about the prairies. Add some Willy Nelson on the radio and Milo snoozing in back, and I was about as near to heaven as a living prairie girl can get.

Here’s the rub though, pulling a trailer drags your gas mileage into the toilet. And one thing the beaten path offered that my romantic flight from the sunset lacked was an abundance of gas stations. Hmmmm. This thought struck me as I glanced at my fuel gauge and noticed I was down to a third of a tank. If you just thought to yourself that a third of a tank is plenty, you need to do some research on the size of the Canadian Prairies. Also, no gas stations generally mean no cell towers either, so Siri wasn’t there to help me find fuel. Oddly enough I was tempted to turn around, which is completely foolish because it would take me back along the only route I knew for sure had no fuel. Continuing eastward, which I did, was a triumph of reason over instinct.

At about an eighth of a tank I got a bar on my phone and immediately asked Siri to bail me out. She took me straight to the Co-op in the Village of Linden. Phew. But, it was 6:25 in the evening by then. You know what you can’t do in a little prairie town at 6:25 PM? Buy anything. Well, in some towns you can still get beer and Chinese food, but I needed fuel for my truck. I already had lots of human fuel. 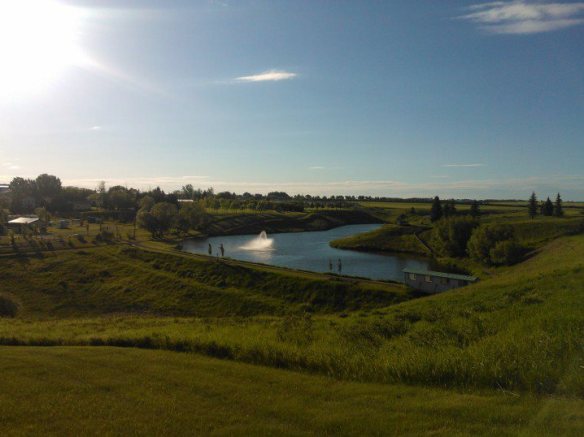 As I realized that I was either tracking down the person who ran the Co-op or staying put, I looked around and saw a pretty little coulee. At the bottom of that coulee I saw a couple of RVs sitting on a neatly manicured lawn beside a pond. What a happy coincidence to find that the Village of Linden has a pristine campground. Its 10 spots are available first come first served for $25 a night. Payment is on the honor system. After Milo and I got settled in, we enjoyed a long walk in the coulee before our dinner of kibble, chips, and beer. No worries, no worries at all.

The next morning, after coffee and more kibble, we tanked up at the Co-op and were back on the road.

Thank you, Linden, for your generous hospitality.

2 thoughts on “The serendipity of travel trailer life, or how Milo and I ended up in the Village of Linden.”